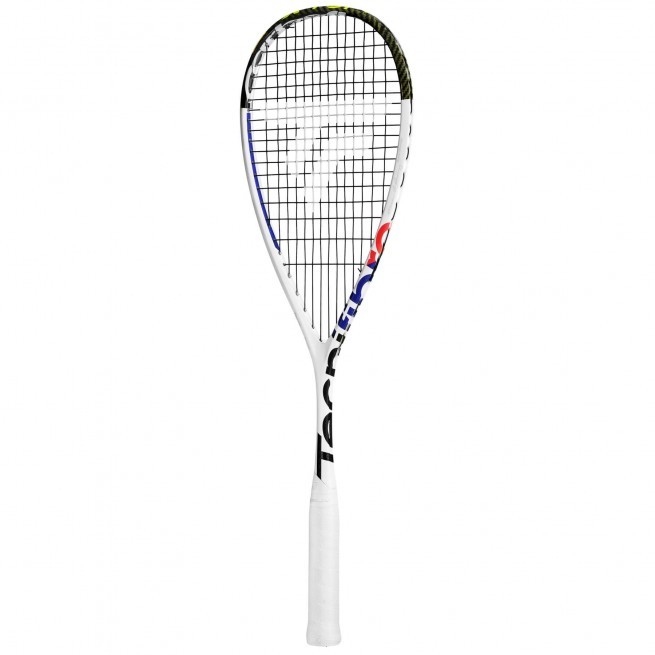 The revolutionary single shaft design offers the player the perfect combination of power and control. The Carboflex squash racket range has been continuously improved and now, in its seventh generation, we have one of the biggest developments! Working hand in hand with the best professional players, Tecnifibre wants to make it the best single shaft racket on the market today.

Aramid fibres (the same material used in bullet proof waistcoats) are used at the top of the squash racket for maximum impact resistance, as well as a PTFE (Teflon) treatment to increase sliding on the wall/ground contact for maximum abrasion resistance. This new mix of materials offers even more resistance than a traditional snap ring.

Without the protective grommet and with integrated grommets, the clean frame design allows for greater racquet acceleration and wall glide for extraordinary swing speed. The removal of the plastic grommet also reduces vibration for greater comfort.

Tecnifibre Carboflex X-Top squash racquets feature the same technologies that made its predecessor - the Airshaft range - so popular. The Airshaft section offers a refined frame geometry for a more dynamic response and higher swing speed. The shaft design is reinforced with X-Arms technology for greater racquet stability and improved aerodynamics while adding minimal weight. There are 12 enlarged string holes in specific areas of the frame (3, 9 and 12 o'clock) to encourage string movement, improving the racquet's forgiveness for an improved sweet spot, allowing the player to generate more power, and increasing the spin/slice the player can put on the ball.

The Tecnifibre Carboflex X-Top squash racket range is designed in an elegant all-white design with eye-catching colours on the brand name and the new X-Top technology. The 3D effects on the handle give the racket a premium finish that feels great to the touch.